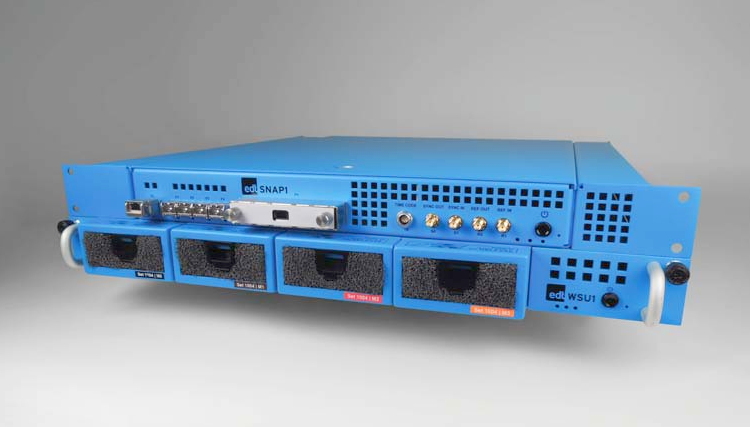 The EDT WSU1 is a mass storage device with data transfer rates of 115 Gbs. Thus the SNAP1 realtime data acquisition unit storage, record and playback time can be increased to about 11 minutes. The unit pairs with a SNAP1 for a 100G 9.8 TB recorder to become the EDT WRAP100G signal recorder. The four removable WSM1 storage modules each have nonvolatile storage of 2.45 TB, making a total of 9.8 TB. There are 60000 record-erase cycles per module via SLC NAND flash memory. The read/write rates are 3.6 Gbs, making a total of 14.4 Gbs. Four more WSMs constitute the WRAP PACK 100G. The rear panel has three QSFP+ interfaces, one with two 12.5 Gbs transceivers and two with four 12.5 Gbs transceivers each, making 125 Gbs total, to attach the SNAP1. The other rear panel connections are two 1 GbE RJ45 connectors, four USB, and one VGA. The 10 GbE NIC system interface uses a CX4 for electrical or an SFP+ for optical signals. The COTS embedded computer has an Intel® Core™ i7 processor with 4 GB of memory, and runs CentOS. EDT software is included.