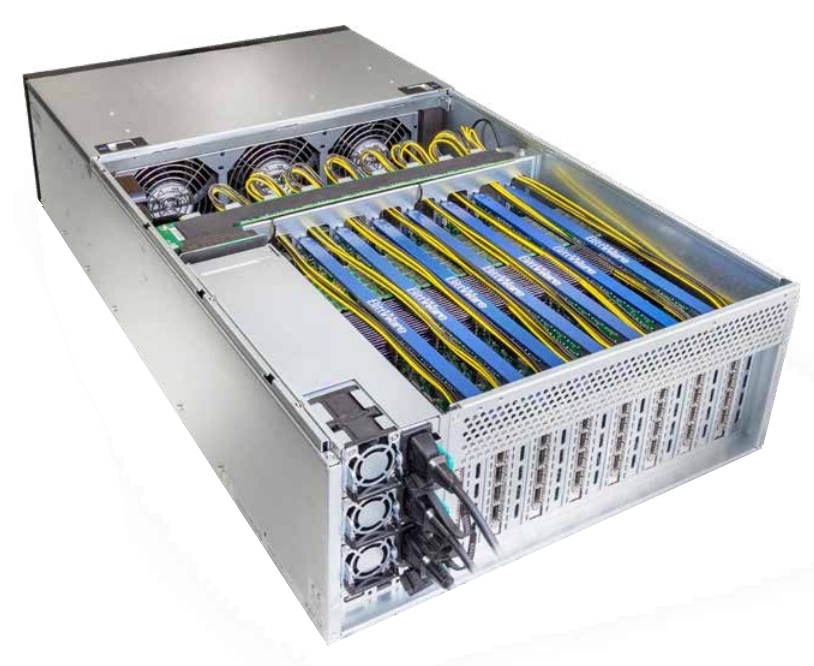 Featuring up to sixteen of the largest Altera Arria 10 or Stratix V Family FPGAs, the TeraBox offers 24 TeraFLOPS of processing power, along with 6.5 Terabits per second of memory bandwidth and 1.28 Terabits/sec of I/O in a turnkey rackmount solution.

The TeraBox seats up to 16 BittWare PCIe boards based on the high-bandwidth, power-efficient Altera Arria 10 or Stratix V FPGAs. These FPGAs provide a system total of up to 18 million logic elements (1,150,000 per FPGA) and 62,000 18 x 18 variable precision multipliers (3,926 per FPGA).

SODIMM memory supports DDR4 SDRAM, DDR3 SDRAM, QDRII+, or RLDRAM3. For example, with 8 SODIMM sites populated, the Stratix V based S5PE-DS supports up to 64 GBytes of DDR3-1600 SDRAM, for a system total of 512 GBytes in 64 banks, with 6.5 Terabits/sec of memory bandwidth.

Each BittWare FPGA board offers up to 4 QSFP+ cages, each supporting 40GigE, 4x 10GigE, or QDR/FDR InfiniBand interfaces direct to the FPGAs’ built-in PHYs for the lowest possible latency. Arria 10 boards also support 100GigE. The QSFPs can be used to interconnect the boards and multiple TeraBox platforms to make bigger clusters, making it ideal for HPC applications, while the low latency 10GigE and 40GigE interfaces are ideal for packet processing.

BittWare’s FPGA boards are equipped with a Board Management Controller (BMC), which accepts IPMI 2.0 commands. BittWare’s BittWorks II Toolkit is used to program the FPGA over USB, monitor board power and temperature, and reprogram the onboard clocks. You can also to set points to shut down the board if it overheats, to access JTAG, and for remote access of the software tools.

Your TeraBox FPGA server is delivered pre-configured and tested, including setup and installation of your FPGA boards and associated hardware, your choice of operating system, and the development tools.